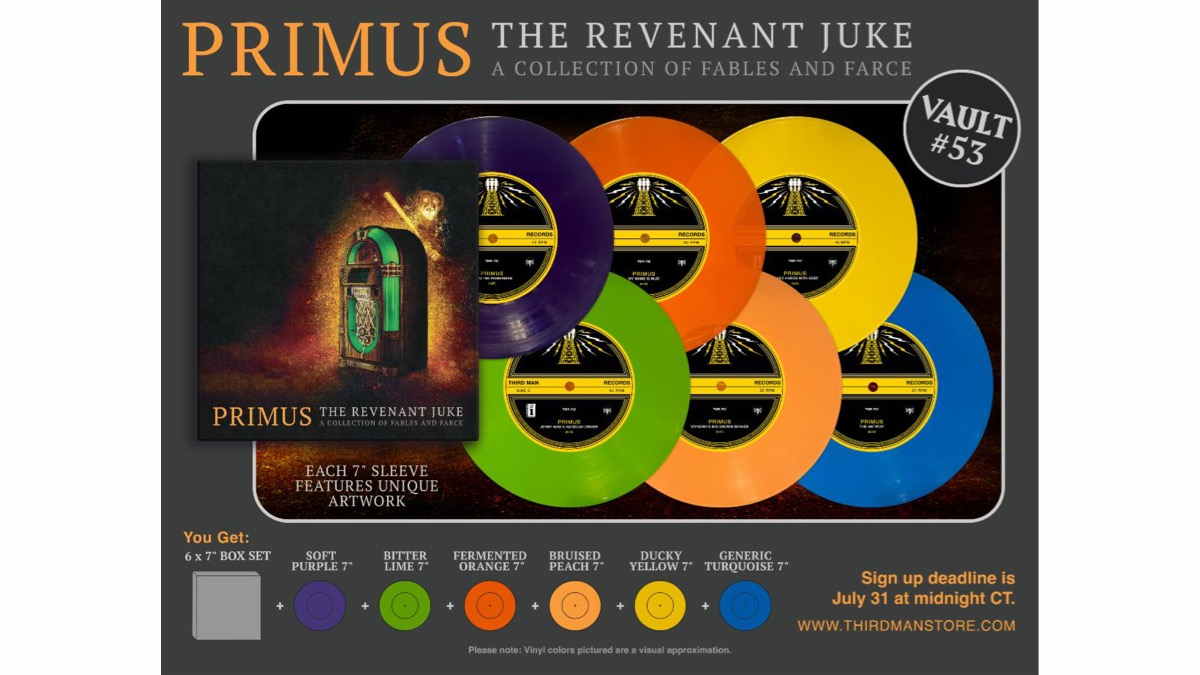 (Big Hassle) Third Man Records is excited to announce Vault Package #53, Primus: The Revenant Juke -- A Collection of Fables and Farce, featuring six colored 7" records -- the band's first 7" releases in their 30-plus years as a group -- with individual sleeve artwork, all housed in a custom telescoping box. Sign up is open now through July 31 at midnight CST here.

Across nearly a dozen albums released, through millions of records sold, and dozens of fans properly satiated and slaked in the live arena, there is one thing that Primus has NEVER done in their thirty-plus years as a band... Release a 7-inch single.

No one really seems to have a good reason or explanation or answer as to why this is the case, as all of their peers from the heady days of "ALTERNATIVE" rock have released veritable boatloads of these platters, both domestic and abroad, hits and misses, gems and chunks of coal alike.

With the mantra that anything worth doing is worth OVERdoing, Third Man Records is honored to properly introduce the Primus to the 7-inch format with a box set collection of SIX colored vinyl singles highlighting the peaks of their catalog going all the way back to 1989. The Revenant Juke: A Collection Of Fables And Farce is available exclusively as the 53rd package in Third Man Records' Vault series.

Disc one features "John the Fisherman" and "Too Many Puppies" from Primus' debut album Frizzle Fry while disc two showcases the inimitable "Jerry Was A Race Car Driver" and "Tommy The Cat" from 1991's Sailing The Seas Of Cheese. Disc three is truly a corker with the breakout classic "My Name Is Mud" ably paired with the "Mr. Krinkle" both off of Pork Soda from 1993. The band's hittiest "hit" anchors disc four where "Wynona's Big Brown Beaver" sits next to "Southbound Pachyderm", each originally released on the 1995 album Tales From The Punch Bowl. "Shake Hands With Beef" and "Over The Falls" make up disc five and emanate from The Brown Album which the band released in 1998. And 1999's The Antipop gives us both "The Antipop" and "Coattails Of A Dead Man" to round it all out on disc six.

The iconoclastic cover image and the striking individual sleeve artwork are all newly created by the esteemed Adam Gates, a long-time associate of Primus who has collaborated with them across multiple artistic disciplines and whose day job finds him as a creative director at Pixar Animation Studios.

Housed in a slick, telescoping box and with the discs pressed on ducky yellow, bitter lime, fermented orange, soft purple, bruised peach and generic turquoise, the entire package is a fitting testament to one of the few truly great bands from the era that is still making relevant music and captivating fans as strongly as it has from the beginning.

Disc one:
"John The Fisherman" b/w "Too Many Puppies" (on soft purple vinyl)