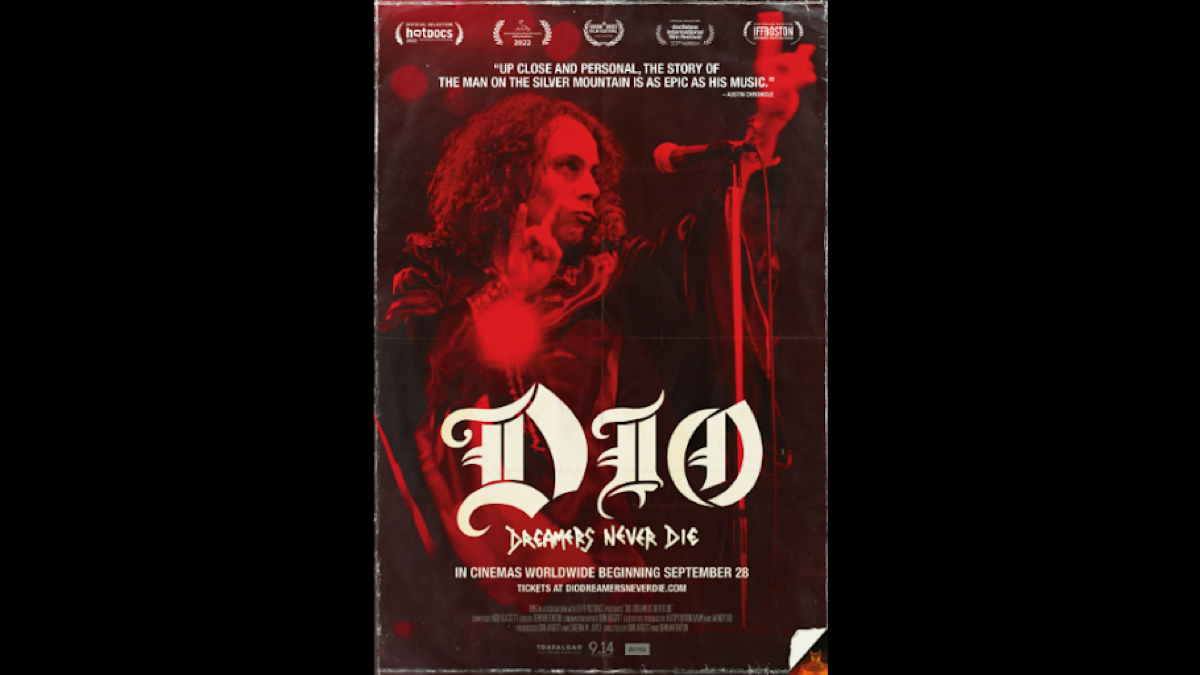 (Chipster) The first-ever, career-spanning documentary on the life and times of legendary metal icon Ronnie James Dio comes to cinemas worldwide for two days only on Wed., Sept. 28 and Sun., Oct. 2.

Executive produced by Dio's widow and longtime manager, Wendy Dio, and fully authorized by the artist's estate, "DIO: Dreamers Never Die" delves deep into the singer's incredible rise from a '50s doo-wop crooner to his early rock days in Elf and Ritchie Blackmore's Rainbow, to replacing Ozzy Osbourne in Black Sabbath, and finally cementing his rock star status with his own band, DIO.

The film incorporates never-before-seen footage and personal photos, as well as offering intimate scenes with his closest peers, family, and friends, among them Wendy Dio, Tony Iommi, Geezer Butler, Glenn Hughes, Vinny Appice, Lita Ford, Rob Halford, Sebastian Bach, Eddie Trunk, and Jack Black, as they bring viewers inside the life of one of rock and roll's true heroes and one of the most beloved figures in rock.

In addition to the feature-length film, this special cinema event will also include a hand-picked selection of outtakes from the cutting room floor, creating an experience that is exclusive only to fans in attendance.

"We are excited to be partnering with BMG and Wendy Dio to present 'DIO: Dreamers Never Die' in cinemas worldwide," said Kymberli Frueh, SVP for Programming and Content Acquisitions for Trafalgar Releasing. "Ronnie James Dio has and continues to influence the heavy metal movement. This cinema event will take fans on a big screen journey into the creative and personal life of this notable frontman."

Ronnie James Dio, who died of gastric cancer in 2010, reigns as one of the most influential rock artists of all time and one of the greatest vocalists ever. With an illustrious recording career spanning from the 1950's through to the 2000's, the documentary follows his trajectory from sideman into singer, songwriter and frontman of not one, but three, of rock's internationally-renowned, multi-Platinum-selling arena attractions: Rainbow, Black Sabbath and DIO. Famous for popularizing the 'devil horns' hand gesture that is now synonymous with hard rock and heavy metal music, Dio was known for not wavering in his pursuit of his rock and roll dreams and continues to influence a new generation of music artists. His fans the world over remember him not only for his massive talent, but for his kindness, resulting in millions of dollars raised for cancer research in his memory.

Argott and Fenton said, "People who have conviction, talent and heart like Ronnie James Dio are in short supply these days. It is refreshing to share his inspiring story of believing in yourself and chasing your dreams. As life-long DIO fans, it is incredibly humbling to bring Ronnie's journey to the screen and we can't wait to share it with audiences."

Rhino/WMG will release the soundtrack from "DIO: Dreamers Never Die" in the fall.