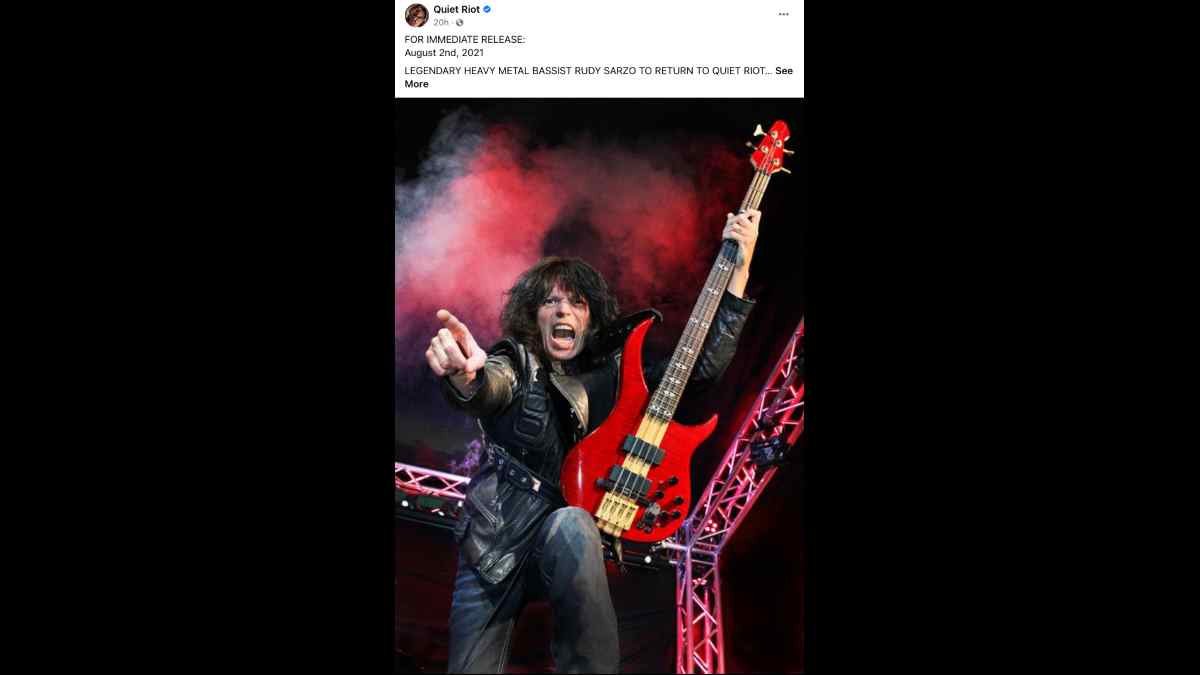 Rudy Sarzo Reunited With Quiet Riot was a top 21 story from August 2021: Quiet Riot have announced that legendary bassist Rudy Sarzo has returned to the band after 18 years. Rudy was part of the "Metal Health" lineup of the band, after returning to group following his stint in the classic Randy Rhoads era of Ozzy Osbourne's solo band.

Sarzo was a member of the group during the Randy Rhoads years and left to join his bandmate in Ozzy Osbourne's Blizzard of Ozz band. Following the "Diary Of A Madman" tour and Randy's untimely death, Rudy returned to Quiet Riot right before they broke into stardom with their chart topping "Metal Health" album.

Rudy would go on to be a member of Whitesnake's most popular lineup and played with Dio, Blue Oyster Cult, Queensryche, and The Guess Who. He is replacing longtime bassist Chuck Wright who is pursuing his solo career and focusing on his all-star "Ultimate Jam Night" residency at the Whisky A Go-Go.

Quiet Riot had this to say, "The band and their management would like to formally thank Chuck Wright for his many years of dedication and perseverance and, most importantly, his distinguished talent. Wright has served off-and-on with Quiet Riot for nearly 40 years, appears on nine albums, and is known as the bassist for Quiet Riot's mega-hit 'Metal Health' (Bang Your Head) and 'Don't Wanna Let You Go'. He was a contributing songwriter on 1986's 'QRIII' and appeared in the band's video for 'The Wild And The Young,' among others.

"Wright has been one of the band's longest touring and recording members and will continue touring with the band through the end of 2021. Chuck is and will always be an invaluable member of the Quiet Riot family.

Rudy Sarzo said of returning to the group, "I'm excited to be back home and celebrate the Quiet Riot Legacy, which began 40 years ago next year with the recording of 'Metal Health', the first heavy metal album to reach #1 on the Billboard top 200 albums chart."