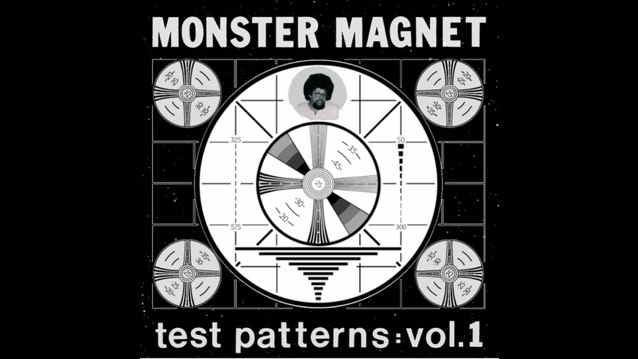 The original lineup of Monster Magnet just released their "Test Patterns: Vol.1" collection and to celebrate we asked Tim Cronin to tell us about the psychedelic masterpiece "Tab". Here is the story:

Tab was originally on our first demo tape "Forget About Life, I'm High On Dope" in '89. The band (Dave, John and myself) had come from Dog of Mystery which morphed briefly into King Fuzz and finally Monster Magnet, (Dog of Mystery, originally John and I, Dave joined later recorded a bunch, King Fuzz never recorded). When we started, the only local band who was signed was Laughing Soup Dish (they put out 2 solid psych records on Bomp) so putting a record out was pipe dream stuff. We just wanted to make music that would amuse us and our friends. Influences were heavy psych, garage rock, exploitation/drug/biker films, and comic books. John and I worked in record stores and Dave ran the comic book store, which were all located in Red Bank, NJ.

John was a wizard with a four track and we got the basics down fairly quickly. Then he went to work and was bouncing tracks so that he and Dave could keep adding layers of psychedelic heaviosity. The lyrics were Dave's tale of a drug addled family that lived in his neighborhood growing up. We were going for simple, heavy and weird. I was definitely the weak link performance wise, I'm not a great or even good drummer but I kept thinking of the deceptively simple repetition of Mo Tucker (Velvets) or the guy from Can and just tried to hold it together. My drum "kit" consisted of two floor toms and a ride cymbal. Tab was later re-recorded for the Tab 25 ep, by that time the band had expanded to a five piece with a proper drummer, Jon Kleiman.

This single on God Unknown is mainly happening because of John, he did all the heavy lifting on this. He cleaned up the original demo and his new remix is otherworldly. It's pretty cool to have something you did decades ago see the light of day and not be embarrassed by it, quite the opposite.

Hearing is believing. Now that you know the story behind the song, listen and watch for yourself below and order the album (digitally and on vinyl) here