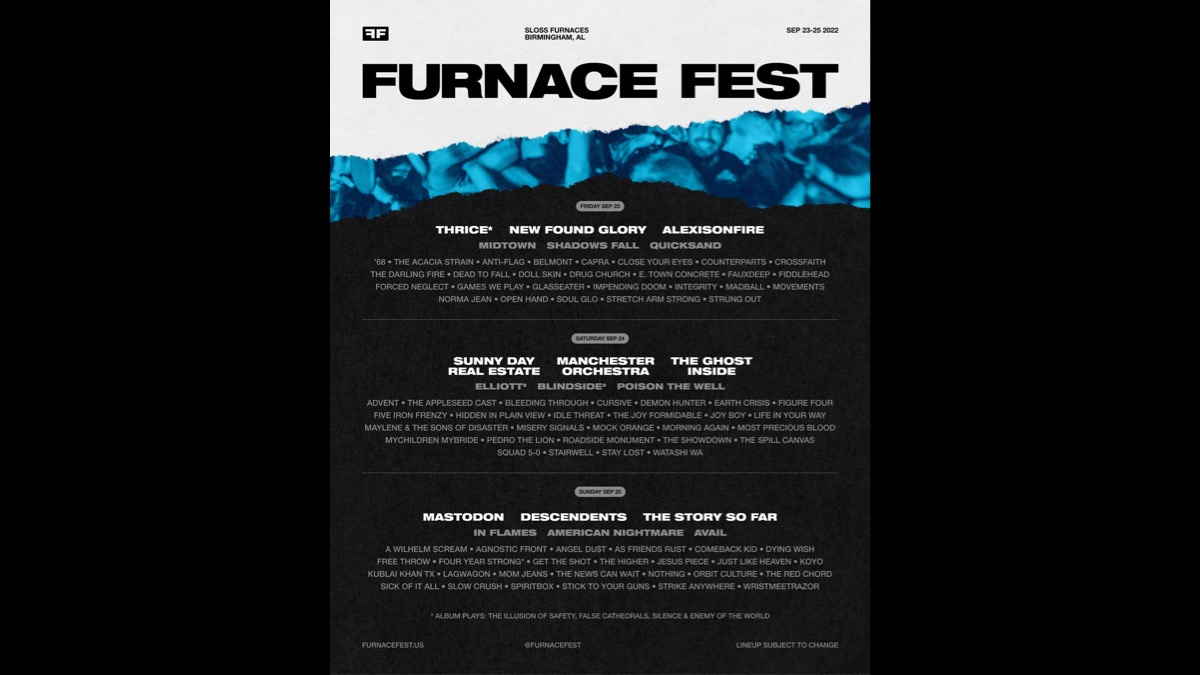 (Big Picture Media) The reunited Sunny Day Real Estate have announced as the final headliner for Furnace Fest, which will be taking place on September 23rd through 25th at Sloss Furnaces in Birmingham, AL.

The band will be leading the bill on Saturday night, September 24th, which will mark one of their first US shows since 2010. We were sent these details:

Fans will also be able to catch acts like Manchester Orchestra, Cursive, Elliott (performing False Cathedrals), Blindside (performing Silence), Pedro The Lion (performing Control), and many others on Saturday.

The 3-day festival will bring rock fans from all over together for performances from over 90 bands. The initial lineup announced performers Mastodon, The Ghost Inside, Alexisonfire, The Story So Far, New Found Glory, The Acacia Strain, Anti-Flag, Earth Crisis, The Joy Formidable, Kublai Khan TX, Drug Church, Nothing, Shadows Fall, Stretch Armstrong, Strike Anywhere, Movements, and many more, gaining the attention of Stereogum, Invisible Oranges, Lambgoat, Loudwire, BrooklynVegan, and other notable outlets.

Along with acts like Midtown and Elliott reuniting for the festival, other notable sets include Thrice performing The Illusion of Safety (2002), Blindside performing Silence (2002), Four Year Strong performing Enemy Of The World (2010), and Pedro The Lion performing Control (2002).

"Furnace Fest took a seventeen year nap before a group of us banded together with hopes of a one-time reunion," the Furnace Fest team shares. "After countless difficulties (like a global pandemic and rescheduling three times) the 'one-time resurrection' went so well that we knew it was only fair to share the experience again. We're beyond excited to share this lineup and are thrilled to welcome 90 total bands on four stages in one, if not the, most unique venues on the planet. To us, Furnace Fest isn't a festival. This is a family reunion of the most epic kind."