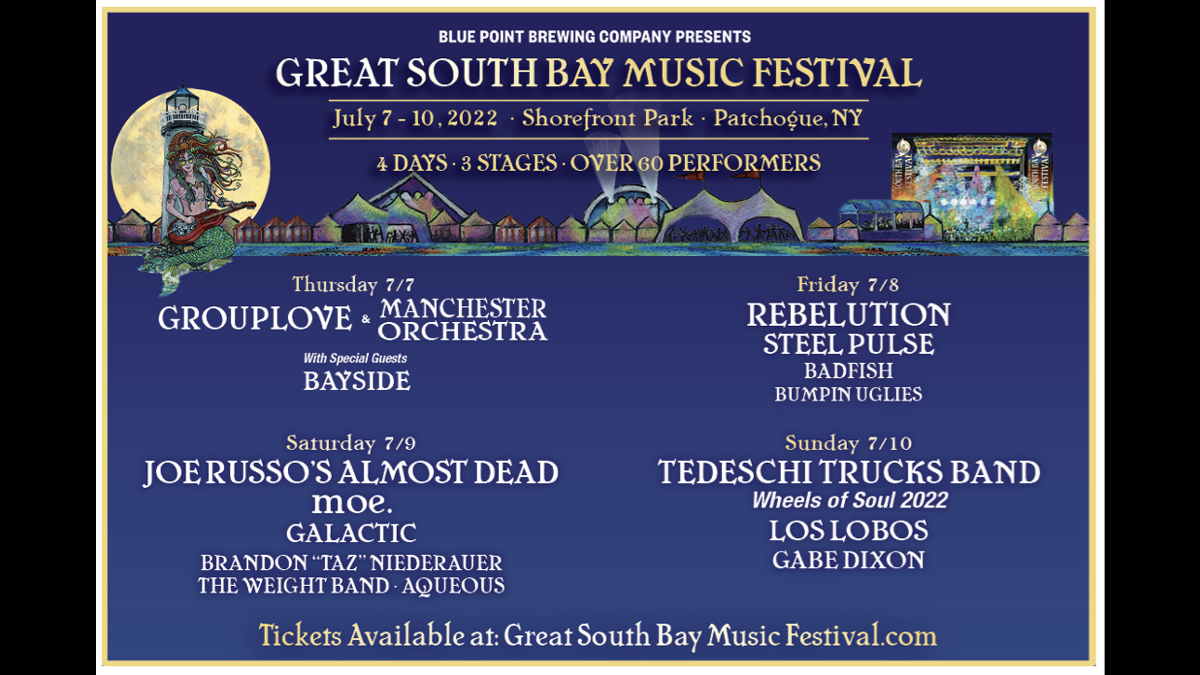 (Big Picture Media) The Great South Bay Music Festival is returning to the waterfront at Shorefront Park in Patchogue Village, NY from Thursday, July 7 through Sunday, July 10, 2022. We were sent the following details:

The fest is well known for presenting four very different days of music, with an eclectic lineup of headline artists performing alongside cutting-edge rising stars. Kicking off the festival on the main stage on Thursday, July 7, indie-rockers Grouplove and Manchester Orchestra will Co-Headline, and Long Island's own Bayside will support (10 performers on two stages).

Saturday at the festival is typically "Jam Day", but 2022 brings the most eclectic and diverse lineup to date. Headlining the main stage is one of the Grateful Dead's most proud and popular tributes: Joe Russo's Almost Dead. Also, returning, one of the pre-eminent progressive rock bands on the scene today, moe., plus New Orleans funk, jazz and "impossible to categorize": Galactic. Lastly, also returning to our main stage is Long Island phenom guitarist Brandon "Taz" Niederauer who has shared the stage with Gregg Allman, Gary Clarke Jr., Warren Haynes, Lady Gaga, and so many more, plus the Weight Band and jam-rockers: Aqueous (19 performers on 3 stages).

Great South Bay will close Sunday with what critics have called "The best show on the road today": The Tedeschi Trucks Band and the "Wheels of Soul" Tour, featuring the full 13pc. Tedeschi Trucks Band, playing a rocking two-hour set, in their only metro NY Summer appearance. Also, appearing on the Main Stage will be Americana-Heartland Rockers: Los Lobos, plus, Nashville singer-songwriter and multi-instrumentalist: Gabe Dixon and his Band (14 performers on 3 stages).