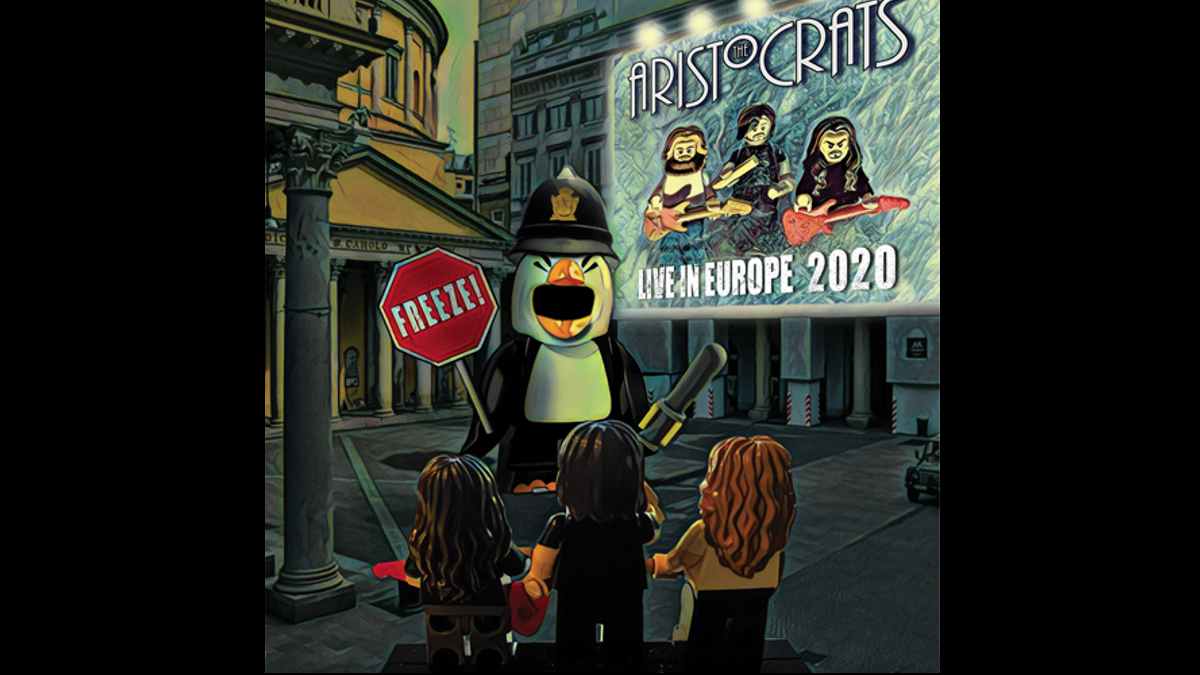 The Aristocrats (guitarist Guthrie Govan, bassist Bryan Beller and drummer Marco Minnemann) have announced that they will be releasing their new live album, "FREEZE! Live In Europe 2020", on May 7th and that it features a special tribute to late Rush legend Neil Peart.

The album was captured in February 2020 at performances in Spain prior to the pandemic lockdowns. One big highlight of the album is an epic performance of "Get It Like That", with a drum solo by Minnemann specially dedicated to Rush's Neil Peart, who passed while the band was on tour.

Govan had this to say about the album, "FREEZE! documents a particularly memorable period for the band so I think it's really fortunate that we were able to capture this musical 'snapshot'.

"After months of relentless gigging, the material from our latest studio recording had started to feel really natural for us and yet... somehow, there was still an unmistakable element of excitement and musical risk-taking on stage every night when we played those songs."

Minnemann shared, "Growing together as a band also means knowing, focusing and perfecting the details of our musical presentations. On tour, we sometimes become our worst critics and maybe one out of ten gigs fully pleases the band as a collective.

"But I believe that sort of 'quality control' is necessary and trying to give 110% every night is the least we can do for us and especially our fans. I have to admit that I at first was reluctant listening to the recordings, almost fearful about how many mistakes I would find.

"However, with a little bit of distance and fresh ears, I was actually more than pleased finding out that this 'hand-picked' selection of Aristocratic tunes I believe showcases the band as a very well-toured, oiled and locked machine, with not only love and attention to detail, but also playfulness and fun. Furthermore, Neil Peart sadly passed away during our European leg... I played my heart out for him every single night."

Beller concluded, "Like Guthrie and Marco said, by February 2020 we were deep into the 'You Know What...?' touring cycle, almost up to 100 shows. We were greased up and ready to go, every night. But we had no way of knowing as we plowed through Spain that these would be some of the last shows we'd play for a while.

"So it's special on several levels for us to be able to share this frozen moment in time, which is what a live album truly is. It's a statement of what we were bringing to stages every night in the heat of a world tour; it's something for our fans who may not have caught this tour to experience and hopefully enjoy at home; and, ideally, it's also something to keep the flame burning for when we can get back out there and let loose onstage once again. Because that's what we do best." See the tracklisting below:

1. D Grade F*ck Movie Jam
2. Spanish Eddie
3. When We All Come Together
4. The Ballad Of Bonnie And Clyde
5. Get It Like That (Dedicated To Neil Peart)
6. Last Orders

The Aristocrats Reveal The Ballad Of Bonnie And Clyde Visualizer

The Aristocrats Music and Merch