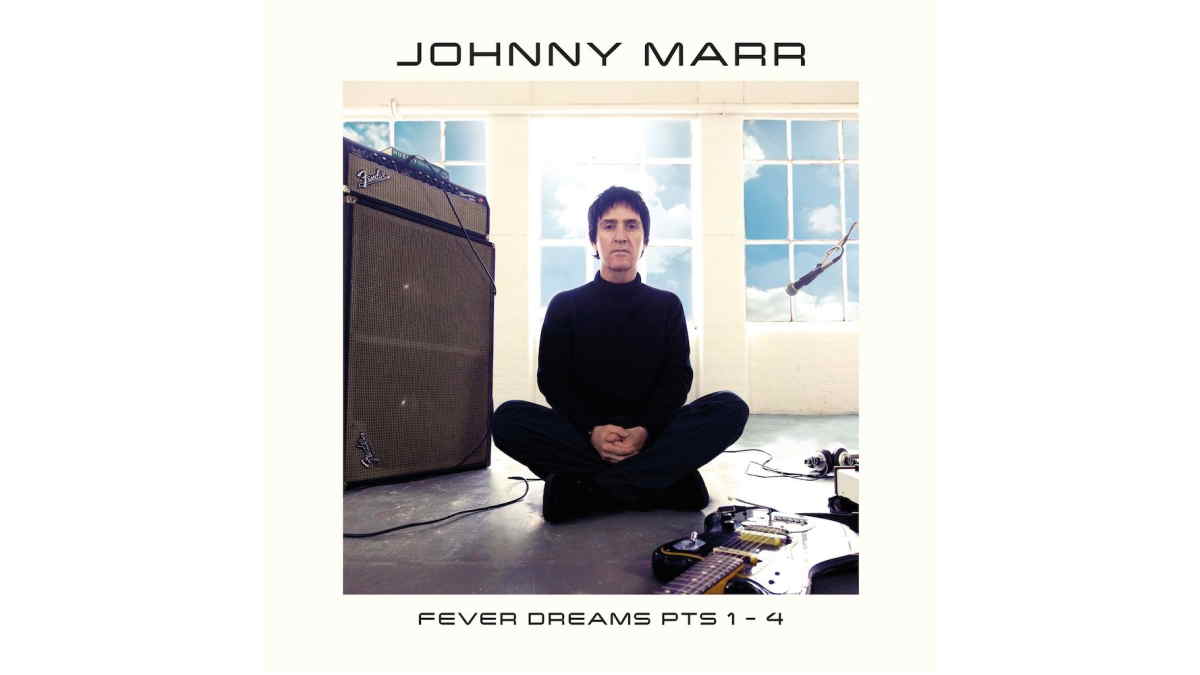 (DawBell) Johnny Marr has announced that he will be releasing a 16-track double album, entitled 'Fever Dreams Pts 1-4', via BMG on February 25th 2022. We were sent the following details:

'Fever Dreams Pts 1-4' is the first full album of all-new Johnny Marr music since 2018's acclaimed UK Top Ten release, 'Call The Comet'. Preceded by opening track 'Spirit, Power and Soul', the album's electro-soul M.O. playlisted by BBC Radio 6 Music and BBC Radio 2, described as "an exercise in progressive creative ambition" by DIY, "invigorating" by Uncut and with "defiance in its DNA" by CLASH - 'Fever Dreams Pts 1-4' is divided into four chapters. All 16 songs make up a fantastically expansive work with a deliberate beginning and end.

Speaking about the album, Johnny says: "There's a set of influences and a very broad sound that I've been developing - really since getting out of The Smiths until now, and I hear it in this record. There are so many strands of music in it. We didn't do that consciously, but I think I've got a vocabulary of sound. And I feel very satisfied that I've been able to harness it."

'Live At The Crazy Face Factory' will premiere globally on Wednesday 10th November, and be available on-demand until Sunday 14th November. Especially curated by Johnny, and offering fans the chance to step inside his custom-built Crazy Face Factory studio where 'Fever Dreams Pts 1-4' was created, Johnny discusses his creative process and life in song writing, alongside a set of full-band live performances from across his career. Fans who pre order the album from the official artist store HERE will be able to access exclusive pre-sale livestream tickets at a special price before the general onsale opens at 9AM BST on Wednesday 20th October HERE. 'Live At The Crazy Face Factory' will be available worldwide & premieres at the following equivalent local times on November 10th.

'Fever Dreams Pts. 1-4' explores a multitude of concepts and themes. Because the wider world effectively shut down during its creation, Marr's focus was pushed into both his interior life, and evoking the emotional and psychological states of others. "It's an inspired record, and I couldn't wait to get in and record every day," he says. "But I had to go inwards."

As well as evoking the past and present, the album looks to the future, the idea that even in the most trying times, hope endures. Songs like 'Hideaway Girl', 'Lightning People' and 'Tenement Time' are anthemic, rousing creations, elsewhere 'The Speed Of Love' and 'Rubicon' offer introspective, exploratory pieces that take advantage of the project's emphasis on space. Running through everything are two key elements: echoes of the wildly diverse music from across Marr's career, and lyrics that are direct, emotional, deeply human, and thereby true to what Marr calls The Language Of The Song.

The first quarter of the album, the 'Fever Dreams Pt 1' EP is released digitally and on very limited edition 12" silver vinyl on October 15th, and features 'Spirit Power and Soul' and three further tracks, 'Receiver', 'All These Days' and 'Ariel'. The vinyl is now sold out on Johnny's official store.

September saw Johnny Marr's anticipated return to the live stage to debut new music from 'Fever Dreams Pts 1-4', his first shows since performing 'No Time To Die' with Billie Eilish and long-standing collaborator Hans Zimmer live at the 2020 BRIT Awards, following his work on the new James Bond film soundtrack. Sold-out dates across the UK were met with widespread acclaim, described as "fabulously exciting" by The Telegraph, "breaking new ground with his solo material" by The i Newspaper, and "emerging from lockdown in one of the most prolific periods of his colourful career" by the NME.

Looking to 2022 and following the release of 'Fever Dreams Pts 1-4', Johnny Marr will join Blondie as a special guest on their 'Against The Odds' headline tour through April and May, including London's O2 Arena, before heading out on The Killers' headline US arena tour, beginning in August through to October 2022.