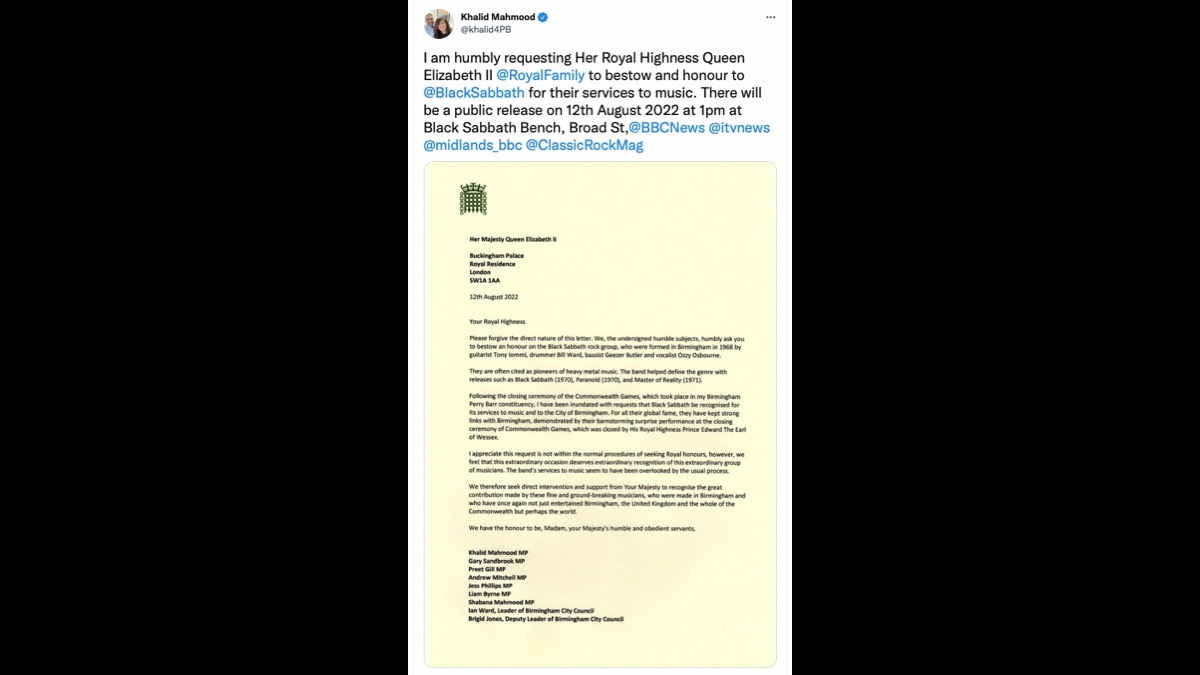 The Queen of England had been called on to honor Black Sabbath by member of the British Parliament, Khalid Mahmoon, along with six other MPs and the leader and deputy leader of the city council of the band's hometown of Birmingham.

Mahmoon shared via twitter, "I am humbly requesting Her Royal Highness Queen Elizabeth II @RoyalFamily to bestow and honour to @BlackSabbath for their services to music. There will be a public release on 12th August 2022 at 1pm at Black Sabbath Bench, Broad St".

The MP attached a letter that was sent to the Queen. It read in part, "Please forgive the direct nature of this letter. We, the undersigned humble subjects, humbly ask you to bestow an honour on the Black Sabbath rock group, who were formed in Birmingham in 1968 by guitarist Tony lommi, drummer Bill Ward, bassist Geezer Butler and vocalist Ozzy Osbourne.

"They are often cited as pioneers of heavy metal music. The band helped define the genre with releases such as Black Sabbath (1970), Paranoid (1970), and Master of Reality (1971).

"Following the closing ceremony of the Commonwealth Games, which took place in my Birmingham Perry Barr constituency, I have been inundated with requests that Black Sabbath be recognised for its services to music and to the City of Birmingham. For all their global fame, they have kept strong links with Birmingham, demonstrated by their barnstorming surprise performance at the closing ceremony of Commonwealth Games, which was closed by His Royal Highness Prince Edward The Earl of Wessex." See the full letter here.