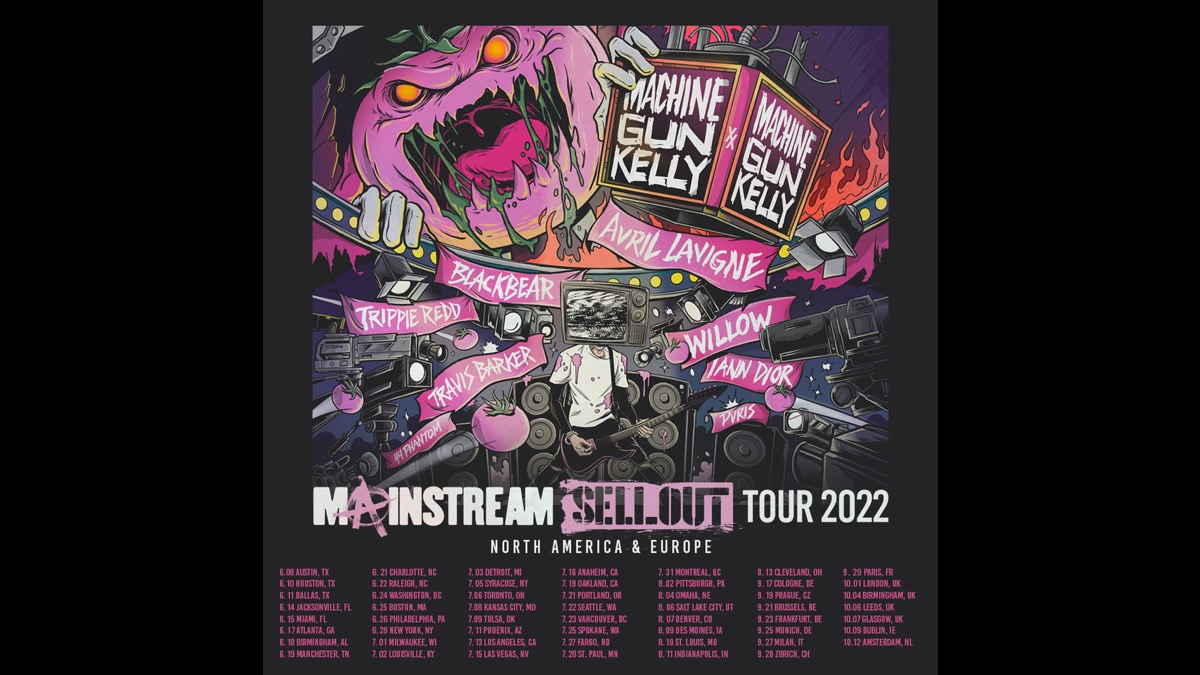 (Interscope Records) Machine Gun Kelly took over the city of Cleveland for a variety of events to celebrate his homecoming. Justin Bibb, the Mayor of Cleveland, presented Machine Gun Kelly with an official proclamation declaring August 13 as MGK Day. Surrounded by friends, family and fans, the bonafide rockstar was all smiles during the celebration at his local 27 Club Coffee shop. Additionally, Cleveland turned the whole city pink by lighting up several city landmarks: the FirstEnergy Stadium (Cleveland Browns), the Progressive Field (MLB Guardians) scoreboard, Terminal Tower, Rocket Mortgage Fieldhouse, and lastly, the Rock & Roll Hall of Fame. Machine Gun Kelly capped off the historic weekend with an action-packed, high-energy performance at FirstEnergy Stadium, where he became the first Cleveland native to sell out the 50,000-seat venue.

To help wrap the North American leg of his 43-city Mainstream Sellout Tour, he recruited special guests 44phantom, WILLOW, Avril Lavigne, and fellow hometown friend Trippie Redd. Machine Gun Kelly brought out friend and long-time collaborator Travis Barker to perform "bloody valentine," "kiss kiss," and a special rendition of Blink-182's hit "All The Small Things." WILLOW returned to the stage for their hit single "emo girl," while Avril Lavigne joined for their collaboration "Bois Lie". The Ohio superstar showed love and dedication to his city as he performed a special intro to his 2015 Cleveland anthem, "Till I Die" before pulling off a breathtaking, daredevil stunt by zip-lining to the stage.

The Cleveland Youth Orchestra also made a special appearance as they joined Machine Gun Kelly on stage for a raw and emotionally stirring performance of "lonely," a song dedicated to his late father and aunt. Closing out the show with fireworks, an emotional MGK fell to his knees, expressing his deep love and gratitude to fans and mouthing "thank you" for their constant love and support.

Before the show, tens of thousands of fans attended the Rock & Roll Hall of Fame's MGK Day, a celebration featuring live music and activities for the entire family. The festivities included a rare exhibition of Machine Gun Kelly's wardrobe and instruments, including his Tickets To My Downfall tour outfit and Schecter PT Model electric guitar that he loaned to the Museum. Machine Gun Kelly joins Taylor Swift as the only artists ever have an official pre-show tailgate event hosted by the Rock & Roll Hall of Fame.