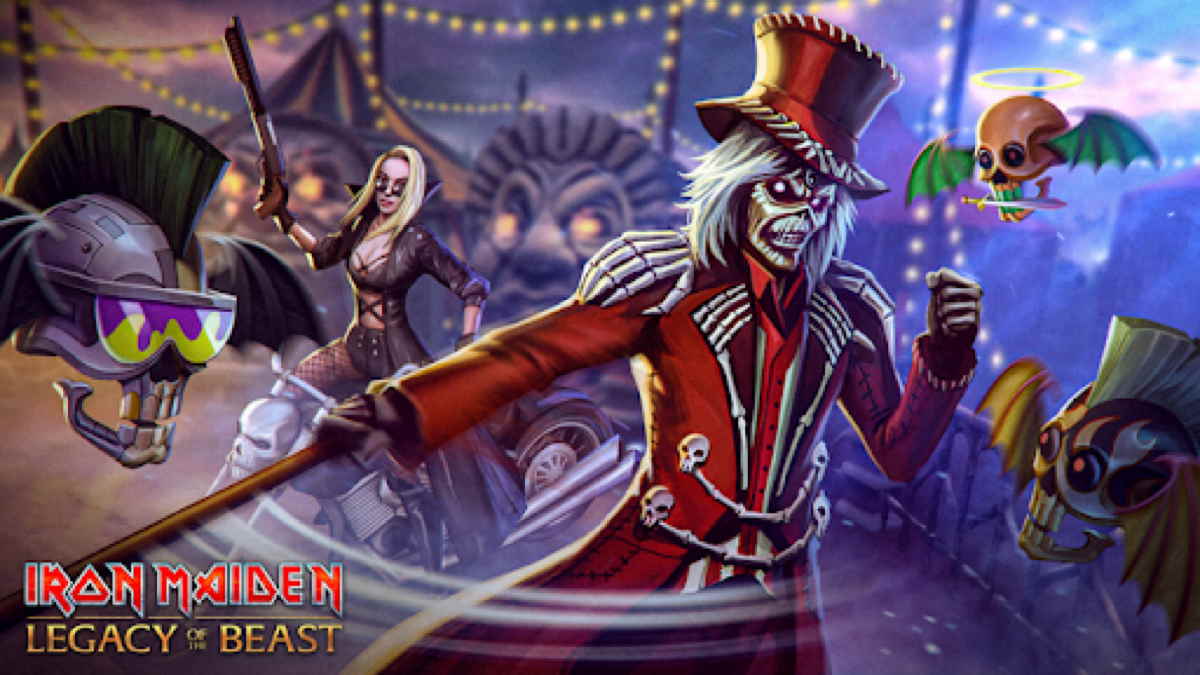 Following several successful collaborations last year and several this year (in 2022 Legacy of the Beast have teamed up with Disturbed, Powerwolf, Arch Enemy, Five Finger Death Punch and Within Temptation), Legacy of the Beast is very excited to immortalize Avenged Sevenfold's iconic logo and NFT project, the Deathbats into the free to play game! This exciting collaboration has culminated in a dungeon event called Nightmare Carnival.

Earlier this year, the Deathbats Club held an exclusive contest on the official Deathbats Club Discord channel for members of the DBC to have their bat featured in Iron Maiden's Legacy of the Beast free-to-play mobile game. 25 semi-finalist were chosen but only 3 were turned into official playable characters in the game - all will be revealed at the Carnival ....

Ringmaster Eddie is in trouble! The Dark Metal Carnival was set to open soon and now a mysterious figure and his host of deadly and mischievous skulls known as the Deathbats have taken over the fairgrounds! Players will have 3 different opportunities to win these deathbats and add them to their team roster!

When asked about bringing the Deathbats into the Legacy of the Beast universe, Lead vocalist, songwriter, and a founding member of Avenged Sevenfold, M. Shadows said, "It's important to us to continue to bring exclusive unique opportunities to our Deathbats Club members, so when Iron Maiden and Navigator Games reached out, we were stoked to work with them on a unique concept for Legacy of the Beast. I loved seeing our fans stoked on the chance to have their custom Deathbat NFT being selected out of 10,000 and then brought to life in Iron Maiden's game, what a cool experience."

In Iron Maiden: Legacy of the Beast, metal and RPG gaming fans take on the role of the band's iconic mascot, Eddie who travels across a spectacularly diverse array of worlds by traveling through time in captivating 3D environments. Eddie appears in many forms, each a part of Iron Maiden's rich history, and each with a set of special powers and abilities.

Navigator Games CEO Will Moore says: "This year we have had an incredible caliber of in-game collaborations and we wanted to create something really special for Halloween. So we invited M.Shadows to develop the concept with us, and the result was 'The Nightmare Carnival'! This collab delivers a whole new level of innovation as Eddie battles with three enemies inspired by Avenged Sevenfold's Deathbats."

Players can earn the Deathbats characters for FREE from our newest login calendar starting Tuesday, October 18th. Players will have 3 opportunities to acquire the Deathbats: Earn the Sentinel Deathbat by completing 1 playthrough of the dungeon, and the Assassin Deathbat by battling in the dungeon 10 times. The 3rd Deathbat is earned for free from our newest login calendar! Log in any 7 days between October 18th and November 17th to earn awesome rewards including the Magus Deathbat on the 7th day!