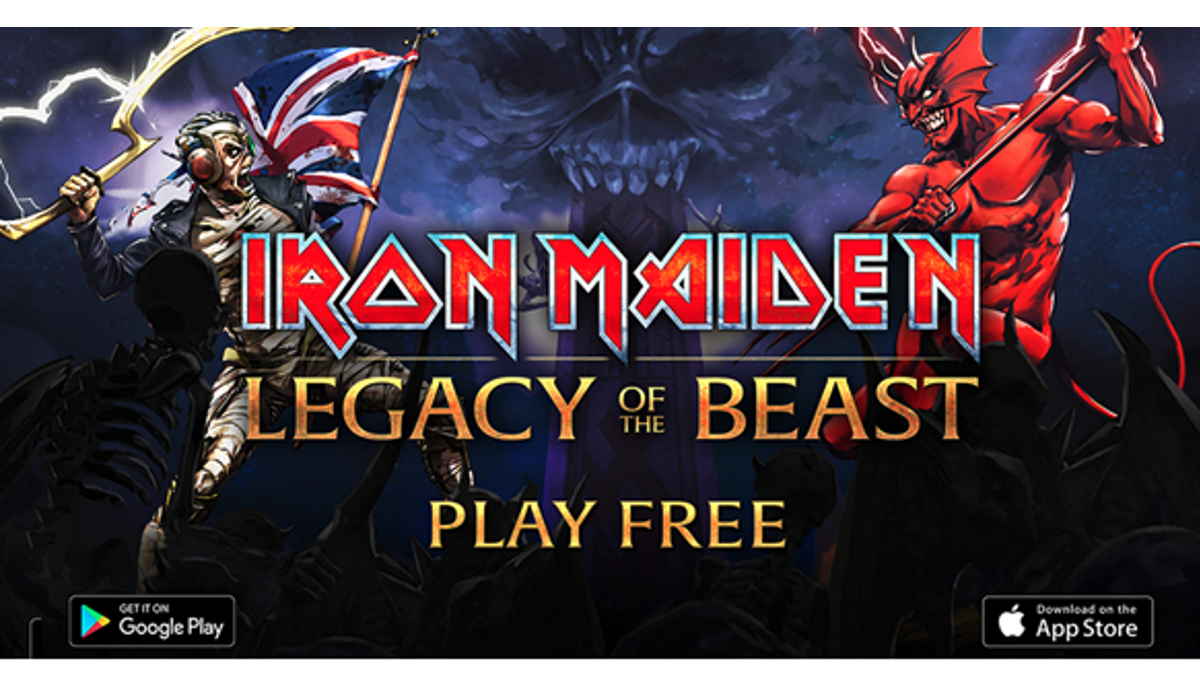 (Cosa Nostra) Iron Maiden have announced a collaboration with Arch Enemy for their Legacy of the Beast free-to-play mobile game, which follows their previous collaborations with Disturbed and then Powerwolf.

We were sent the following details: The result of this collaboration is a week-long event called 'Atomic Sunset'. The Queen Beast character is influenced by Arch Enemy's upcoming single and video for "Sunset Over The Empire", which will both be released soon, on May 20th. The single can be pre-ordered as a very limited 7inch and pre-saved on digital platforms here.

The week-long event will take fans and players on a journey with Eddie and Queen Beast, a regal warrior harnessing the fierce powers of wild animals, striking fear in the hearts of all who oppose her! As they walk through a post-war dystopian wasteland, society at large is witnessing the rise of a mutant species, a creature that is the product of the nuclear war. They are driven to destroy all of what is left of the natural world; human and animal kind. Queen Beast and her companion GreyClaw must work together with Doomsday Eddie to gather survivors and rebuild the community while fighting mutant henchmen. Future generations' survival lies in their hands.

When asked about hearing Iron Maiden for the first time, Arch Enemy Bassist Sharlee D'Angelo said, "I first heard of Maiden through a compilation album called Metal for Muthas - then a couple of months later I saw them in concert and it blew me away because I've never seen a band with that kind of energy and musically it was just, like nothing I've ever heard before."

Lead singer Alissa White-Gluz added, "I find that their stage performances and personas really inspire me too. I remember one of the first times I saw them (IM) perform and I saw Bruce Dickenson basically do a flying jump, over the monitors while singing and landing on his knees in front of the crowd - and I thought what an amazing frontman he is ... running around on stage, no matter the song, keeping the notes - I knew that I wanted to be a front person who also puts on a super wild show like that!!"

Guitarist Michael Amott also shared his special Iron Maiden memories by saying, "We're so lucky we got to tour with them a few times, seeing Eddie backstage and watching the inner workings of that whole setup is really inspirational, really showed you what's possible."

When asked about contributing to the creation of Queen Beast, Alissa noted, "We made sure to include elements of the entire band. We worked directly with the developers to make this character really special and unique that really symbolizes Arch Enemy. I think fans playing this game will have a fun time, also seeing AE lyrics in the script, in the storyline of the game and I'm curious to see who picks up on the little easter eggs we left in there. Alissa continued, " It's really exciting to see that AE will be fighting alongside Eddie and our character that we've developed Queen Beast along with her companion Greyclaw." When asked about what Queen Beast symbolizes, Alissa proclaims, "strength, femininity, power and compassion! We really put a lot of detail into developing her attacks, the way she looks, the way she moves, and I think its gonna be a really fun element for people playing the game."

Navigator Games CEO, Will Moore said, "Arch Enemy are quite possibly one of the best and most-talked about death metal bands on the planet. They have also joined Iron Maiden on tour numerous times, so this collaboration has been on our wish-list for ages. We can't wait to unleash the Queen Beast character into the game on May 12th." Watch the "Meet Queen Beast" video below: