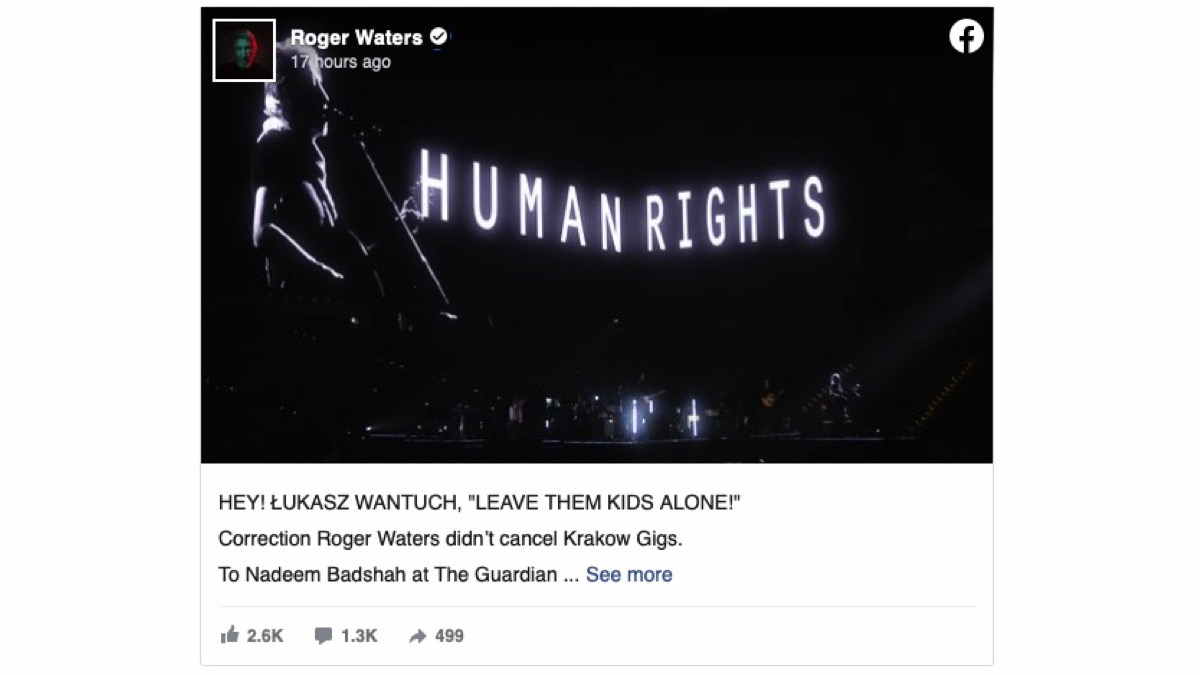 Pink Floyd legend Roger Waters has taken to social media to correct reports that he had canceled two upcoming shows in Krakow, Poland next April due to his stance on the war between Russia and Ukraine.

Waters was scheduled to play two shows at the Tauron Arena in in Krakow Poland on April 21st and 2nd of next year, but the shows are now listed as canceled, and no longer appear on his website or Live Nation Poland's online ticket storefront.

The music icon took to Facebook to tell his side of the story. He wrote, "HEY! ŁUKASZ WANTUCH, 'LEAVE THEM KIDS ALONE!' Correction Roger Waters didn't cancel Krakow Gigs. To Nadeem Badshah at The Guardian And Anna Piatkowska at Gazeta Krakowska

"Dear Sir and Madam, Your papers are wrong in their assertions that either, I or my management, has cancelled my forthcoming shows in Krakow, we haven't. It is true that a town councillor in Krakow, a Mr Łukasz Wantuch has threatened to hold a meeting asking the council to declare me 'Persona non grata' because of my public efforts to encourage all involved in the disastrous war in Ukraine, especially the governments of the USA and Russia, to work towards a negotiated peace, rather than escalate matters towards a bitter end that could be nuclear war and the end of all life on this planet.

"Not withstanding that this chap Łukasz Wantuch seems to know nothing of my history of working, all my life, at some personal cost, in the service of human rights, he, in an article in a local newspaper urged the good people of Krakow not to buy tickets to my show. Not very democratic sir?

"If Mr Łukasz Wantuch achieves his aim, and my forthcoming concerts in Krakow are cancelled, it will be a sad loss for me, because I have been looking forward to sharing my message of love with the people of Poland, something I have been doing on many tours over a career that has lasted in excess of fifty years.