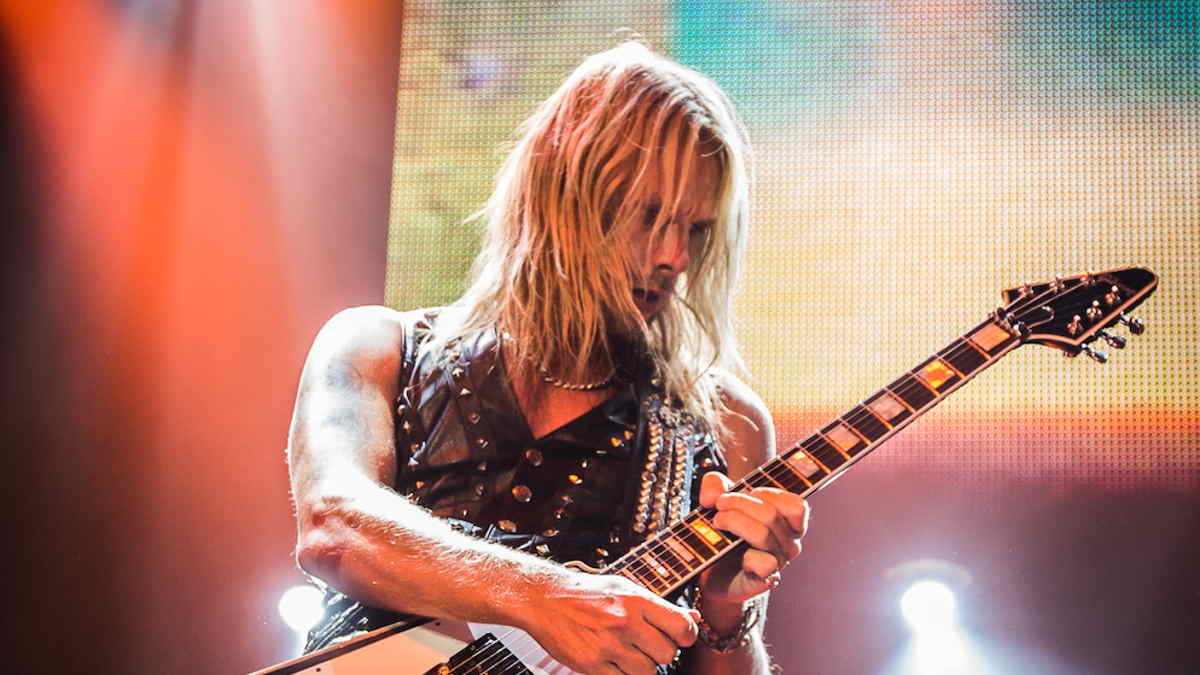 (hennemusic) Judas Priest guitarist Richie Faulkner has been discharged from a Louisville, KY hospital and is resting and recovering at home following emergency open heart surgery after suffering a life-threatening complication while performing at the Louder Than Life Festival in the city on September 26.

The rocker was rushed to the Rudd Heart and Lung Center at University of Louisville (UofL) Health - Jewish Hospital immediately following the band's set at the event after he quickly recognized the seriousness of the situation, which saw him suffer an acute cardiac aortic dissection while on stage.

A cardiac aortic dissection is a separation of the aorta into two areas of blood flow which can cause a number of complications, including a heart to rupture. A cardiothoracic surgery team led by UofL Health's Dr. Siddharth Pahwa completed a 10 ½ hour surgery replacing an aortic valve and ascending aorta replacement with a hemiarch replacement. "He was only four miles away, but miles equal minutes and he did not have many to spare," says Dr. Pahwa.

"Mr. Faulkner is alive today because the stars aligned," he added, according to WHAS11 TV Louisville. "He had an outstanding emergency care team, he was close to a world class heart center, and he was quick to recognize he needed help."

In his first public statement following the incident, Faulkner said he could see the moment when the complication happened when reviewing concert footage.

"I can see in my face the confusion and anguish I was feeling whilst playing 'Painkiller' as my aorta ruptured and started to spill blood into my chest cavity," explained the 41-year-old rocker. "From what I've been told by my surgeon, people with this don't usually make it to the hospital alive."

"Five parts of my chest were replaced with mechanical components...I'm literally made of metal now", while adding: "This came totally out of the blue for me - no history of a bad heart, no clogged arteries etc...my point is I don't even have high cholesterol and this could've been the end for me. If you can get yourselves checked - do it for me please."

Following the September 26 incident, Judas Priest immediately shut down the remainder of their North American tour, which was scheduled to wrap up in Hamilton, ON on November 5. View fan filmed footage of Richie performing "Pain Killer" at the concert here.