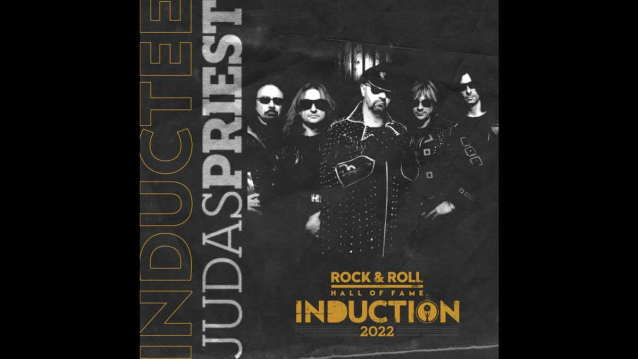 (hennemusic) Judas Priest were among the artists inducted into the 2022 Rock And Roll Hall Of Fame during a November 5 event at the Microsoft Theater in Los Angeles, and video of their performance has surfaced online.

Former members K.K. Downing (guitar) and Les Binks (drums) took the stage with the current lineup of Rob Halford, bassist Ian Hill, drummer Scott Travis, guitarist Richie Faulkner, as well as Glenn Tipton - who retired from full-time touring a few years ago while dealing with the effects of Parkinson's Disease - to deliver a medley of classic tracks "You've Got Another Thing Comin'," "Breaking the Law," and "Living After Midnight."

With the exception of Faulkner, all players on stage - and their late drummer Dave Holland - were inducted and honored with the Musical Excellence Award, which is given to artists, musicians, songwriters and producers whose originality and influence creating music have had a dramatic impact on music.

According to Rolling Stone, Alice Cooper welcomed the band to the Rock Hall, describing Judas Priest as "the definitive metal band."

"They defined the sound we know of heavy metal and their sound is unmistakable," said Cooper. "And what can you say about Rob Halford's voice? Never have screams covered such a range. Is there any emotion that he can't express? They're electrifying on stage and one of the hardest-hitting live bands in the history of rock and roll. Priest has carried the flag of hard rock and heavy metal proudly for something like 50 years, never wavering or following trends or pretending to be anything but exactly what they are. They are flying high tonight. Much deserved and long overdue."