Greta Van Fleet guitarist Jake Kiszka explained why the band has tried to create the sound of rock during the 1960s and 70s because he believes that rock'n'roll has become a novelty today and is an "endangered species" but he believes musicians from his generation can keep it viable it they approach it with integrity.

He told Rolling Stone: "That's the thing that destroys a lot of good art now - chasing trends. There's comfort in knowing that you'll make that money. The record company will hire writers to make sure they see a return on their investment because - structurally, scientifically - the song will work. It's catchy. It's a mathematical fact that people will perceive it one way or another. That's why it's difficult in our world to cut through. When you are doing something truthful, it's easy for someone to say, 'That sounds like this band from the 60s and 70s. It's the throwback sound.'

"In that response is the answer: That is because music meant something during that period - a lot more than it does now. It was done by the artist for the artist. It was music for the people. But rock'n'roll has become a novelty. It doesn't have the essence of what it was - its greatness. People say it's dead now, but it's a minority. It's an endangered species. It's gonna take young guys like us in our generation to see that."

Original KISS guitarist Ace Frehley is gearing up to promote his new solo album but he says that he would drop everything to take part in his old band's farewell tour but he would only do it under certain conditions.

Ace told VintageRock.com, "Getting involved with Kiss on the road would take precedence over what I'm doing with my band. But the only way I would seriously consider it is if I took back my make-up and costume and my character - which I designed.

"Tommy Thayer is not a bad guitar player, but he basically just mimics everything I wrote, and tries to imitate my persona. He's been doing it for 15 years. But the reality is I'm the original guy. And nobody can really copy the way I play guitar.

He explained elsewhere in the interview that he owns the rights to his make-up and costume but licenses it to KISS. He said, "My attorney told me that I licensed it to them. That's all I can say. They may deny it, but he told me, 'You didn't sell it to them.' But what are the ins and outs of the licensing deal, I'm not 100% sure of. I think I licensed it to them for perpetuity...

"There are all these legal terms that I'm not always so familiar with, or understand the complete meaning. But I definitely didn't sell it to them. Peter sold his make-up to Paul and Gene, but I didn't."

Rush's landmark "2112" 1976 concept album has been selected as one of the records to receive Heritage Prize designation from The Polaris Music Prize, which recognizes Canadian music.

"Our Heritage Prize jurors listened to dozens of classic Canadian albums and tried to imagine which ones would have made it onto a short list in the four pre-Polaris eras," said Mary Dickie, the Heritage Prize jury foreperson.

"They weighed innovation, musicianship, lasting influence and general brilliance and came up with this list of outstanding albums that reflect the remarkable diversity and genius of Canadian musicians. Thanks to all the winners for your timeless work." See this year's full list of winners

Tool are hard at working on their long awaited new album but that hasn't stopped them from touring and this week they revealed plans to launch a European tour next summer.

The trek will include the group's headline performance at next summer's Download Festival and other leading events in Europe including Rock AM Ring, Rock IM Park, 'Impact Festival' and more, along with headline dates.

There is a chance that fans will have the following to 2006's "10,000 Days" by then with Maynard James Keenan tweeting last month, "Update. Scratch vox tracked a while ago. Adam Jones deep in guitars now. Final vox after. Step back. Adjust. Mix. Adjust. Re-adjust. Master. Adjust. Re-adjust. Long way to go but much closer. #Tool #2019." See the tour dates 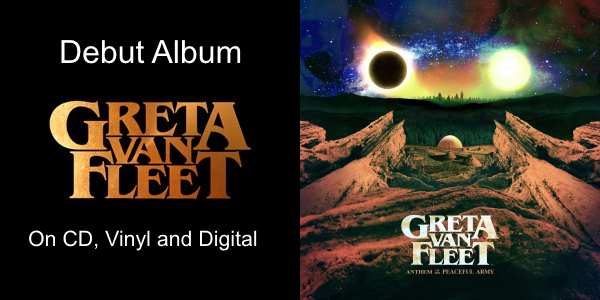 Former Of Mice & Men frontman Austin Carlile says that he was forced to leave the group because performing was tearing holes in his spine and his doctor told him that he could no longer perform.

He left the group in December 2016 under medical advice due to the effects of Marfans Syndrome. He recently gave an emotional interview to I Am Second and discussed his forced departure from the group:

"In October of 2016, my doctor said, 'You can't do this any more.' Every time I was singing I was tearing holes in my spine and the pain was because the spinal fluid was coming up.

"The doctor's told me, 'You can't be in the band and your body needs to rest.' Everything that I was, was that band. I walked away and I knew God was calling me to do something different. I was so confused as to what it was."

Former Slipknot drummer Joey Jordison has revealed that he has begun work on his autobiography but warns that it may take a while before fans can get their hands on it.

He told the Impact Metal Channel, "I've had a couple of offers from book companies but I've been so busy with new music projects and recording and touring that I haven't really got down to it.

"I can't do it on the road because everything else takes all my time. But as far as the book is concerned, I already started it, to be completely honest, and it will just take some time to make sure it's absolutely detailed because I can't complete it without completing the Sinsaenum tour."

Bring Me The Horizon frontman Oli Sykes revealed that their new song "Wonderful Life," came out of songwriting sessions that he and Jordan Fish did for Limp Bizkit.

Sykes and Fish were hired to help write music for Limp Bizkit's yet to surface new album last year with Fred Durst but Oli told BBC Radio 1's 'Rock Show with Daniel P. Carter' that the sessions were not very productive as far as creating new music for the rap-metal band but did result in their new single.

He explained, "Last year, me and Jordan went and worked with Fred Durst on a Limp Bizkit album. It just didn't work out to be honest. He just didn't show up most of the time. Lovely guy, but I don't think he was ready to make an album. I think he was pushed into it a bit, like, his managers and people said 'these are the guys you want to work with.' So we gave him all these ideas and I mean it was just bad from day one to be honest."

He then revealed that "Wonderful Life," was born during those sessions. "It's one of them things, looking back, where it wasn't meant to be. One good thing came out of it: me and Jordan wrote this riff and I one day decided the tempo and key matched almost perfectly with the song. So we de-Bizkit'd it a bit, and it ended up sounding pretty sick."

More Bring Me The Horizon News

Singled Out: Karen Lawrence's It's Been So Long

Acclaimed blues rocker Karen Lawrence recently released her "Best Of Live" album and to celebrate we asked her to tell us about the song "It's Been So Long". "Here is the story:

It was difficult for me to chose one song from the Best of Live collection. It was between two of my favorites: Fun and Games and It's Been So Long. On one hand I'd love to elaborate on the torchy, flower-petal-pickin'-he loves me, he loves me not Fun and Games but I chose It's Been So Long. An element these two share in common is the way I presented both songs to the band.

In the early days when we were starting out we had only about 20 minutes worth of material. We were not doing covers either. If I'm singing, I like singing "truth" and that comes from me. They'd play them as fast as I could write them.

Often, for fun, I'd surprise them with a new song on stage. I'd set the groove with the drummer, let the guys know the key and use hand signals for the chord changes (1-4-5-bridge, etc.). It was thrilling and inspiring. However, the first time we played It's Been So Long it was an absolute train wreck; so embarrassing, everybody watching, we couldn't wait for it to be over but the jam was definitely hot. What began as a 3 verse, 1 bridge groove became, over time, an 11 minute rollercoaster ride we loved to perform.

On The Best of Live CD it's been edited to a radio friendly 4:52 minute song and it's great but I encourage you to dial into Rick Dufay and the entire band on the Live at the Lake 11:09 version. Listen to how Rick plays and embellishes the melodic theme I forced upon him. He makes it hip and beautiful. Throughout the song he flies by the seat of his pants and the band is right on his heels. That was Blue By Nature's M.O.. We'd start out with a relatively simply structured song and then everybody fanned out but grooved together-each member listening, feeling, using their musical talent to make it flow. When we played it was an improvisational hot mess! I'm pretty sure that's what our audiences saw and enjoyed. I know I did! I'm not sure I'll ever have the luxury of that kind of wild freedom on stage again; spontaneous, inspired, indulgent, a unique feeling I remember very well. There were performances after which I had to stop and catch my breath! Imagine, I had to lean against a wall and catch my breath! Just incredible! I'm thankful as a musician to have had such an experience and I'm glad a taste of it was captured on this CD.