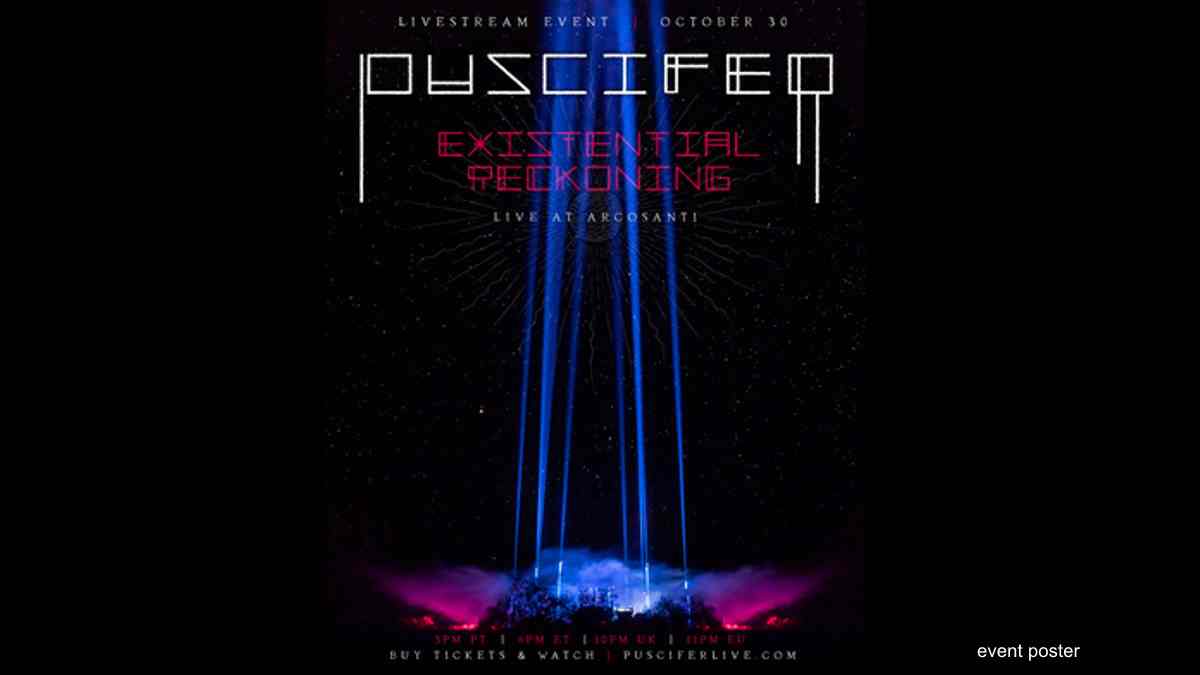 Puscifer have announced that they will be staging a special live stream event entitled Existential Reckoning: Live at Arcosanti, that will be taking place on October 30th.

The event in the Arizona high desert will celebrate the release of the band's fourth album, "Existential Reckoning," that same day and will launch at 3:00 pm Pacific/6:00 pm Eastern/10:00 pm UK/11:00 pm EU and remains on-demand for 72 hours.

Frontman Maynard James Keenan explained the selection of the location, "If you're not familiar with Arcosanti, I highly recommend that you look it up. It's one of a long list of examples of architects, artists, actors, musicians, writers, and poets.

"People who are not necessarily from Arizona but came here and found that creative tick that burrows under your skin here, something that sets you in a motion to respond to this, what I consider to be equal parts inspirational and hostile, environment. It's not easy to survive here.

"There's already been a dust devil that's whipped through here, rattlesnakes, crazy red ants outside of my sleeping quarters which tried to consume my dog. We feel like we're on the edge of the world.

"Imagine if you were an extra-terrestrial traveler and you landed in the Southwest and wanted to assume an identity here and blend in, this would probably be a good spot to do that."

Promoter Danny Wimmer added, "We could do a live stream from anywhere - a sound stage, an empty theater. But this location, at Arcosanti, in the heart of the unforgiving yet beautiful Arizona desert, adds another dimension to Puscifer's music.

"Maynard is an artist in everything he does, from his music to his wine to his farm-to-table restaurant. The common thread running through all of it is that he doesn't take any shortcuts - and he's chosen an environment that doesn't allow for shortcuts.

"'Existential Reckoning: Live at Arcosanti" promises not just to be an experience, but to be an insight into that desert world that fuels and inspires Maynard and Puscifer. The only thing better would be to enjoy the show with a glass of Maynard's Caduceus wine in hand."

Watch the trailer for the event below: