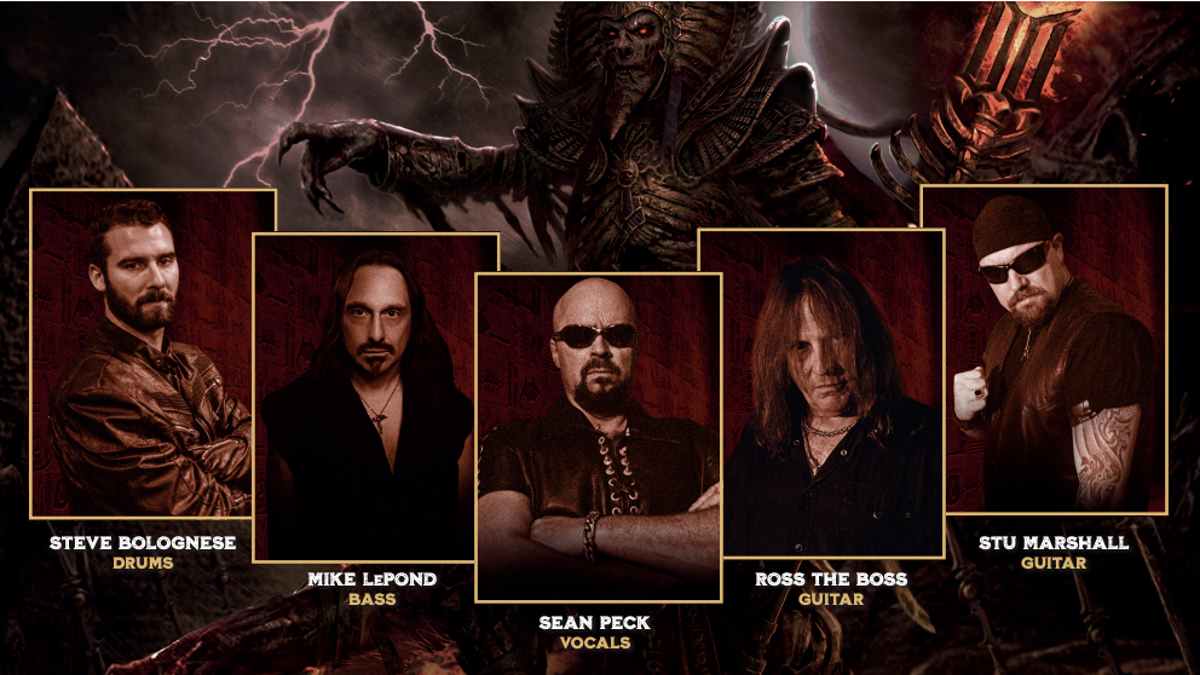 Supergroup Death Dealer recently released their new single "The Heretic Has Returned" from their "Conquered Lands" album and to celebrate we asked frontman Sean Peck to tell us about the track. Here is the story:

When my guitarist Stu Marshall sent me the music piece for it I instantly came up with the verse melody on the first listen. The track was really smoking and I loved it right away. I have the idea in my head and when you do that you have to sing it for real in the studio how you hear it in your head. What you hear in your head can sometimes be more ambitious that what you can actually sing and make sound good. This was one of those cases. Eventually I got it to sound good using my full chest voice but it was definitely a challenge. I tried a couple of different techniques to kind of cheat and get the same result but it just was not coming out how I wanted it. There is always a song on every album where you run into this for me it seems but this was a dragon I eventually slayed. S
Stu Marshall lives in Australia and so his morning is my 3pm or so and he does his best work when he first wakes up in the morning and sucks down a few cups of coffee and has his vegemite on toast. The chorus on this song I just was not feeling and thought we needed something stronger. We did what we always do and cracked out on it until we had a nice guitar bed for me to do my magic. Disclaimer: (We did not actually do crack ha!). Now I needed a song title and topic. I was going through a bit of some writer's block when we were putting this record together, not from a melody writing standpoint but from a song topic standpoint. So when in doubt I always turn to crazy sci or fantasy or occult fiction. So my favorite Death Dealer song had been CURSE OF THE HERETIC and I decided to give the song a sequel. I wrote the lyrics in about 20 minutes once I had the song idea and as every metal head should know, no heavy metal album should be without a song about either witches or vampires. It is pretty much a rule written in the book of heavy metal. So with this song we were able to check off the box with both this song and the song BEAUTY and the BLOOD which is on the album.

We had decided early on in the marketing of the album that we were only going to release 3 songs form the album to the public via the normal streaming channels and youtube etc. Now that the album has cycled we wanted to put one more track out to remind the people that maybe did not buy the record, they had a serious slab of steel available to them. It was tough to decide which one to put out there because the ballad 22 Gone is really strong and Ross The BosS thinks it is the most depressing song in heavy metal history. But Stu felt really strongly about this one and the fans seem to be digging it!

I have since recovered from my writer's block because since April 2020 I have written and recorded over 70 songs for Death Dealer, Cage, The Three Tremors, some friends bands and another band I will be launching in 2022. So it was like a dam bursting ha! There you have it now crank it up and do some shots!! Not Covid Vaccine shots silly-face, ALCOHOL!!!