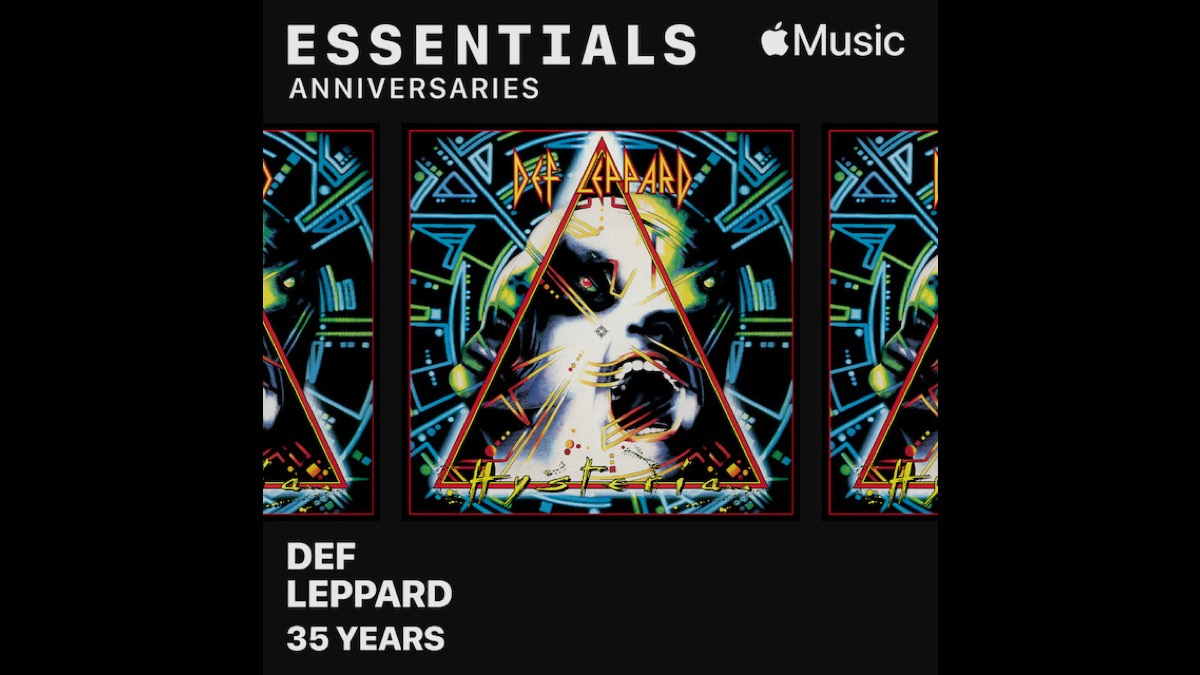 Def Leppard's Joe Elliott and Phil Collen celebrated the 35th anniversary of their blockbuster album, "Hysteria", on of Essentials Radio on Apple Music Hits and the show has shared some excerpts from the episode that premiered on Wednesday (August 3rd).

Guitarist Phil Collen said of the album's success and this special anniversary, "It's stunning. I remember hearing the mixes when Mutt first done them and thinking if my mum's the only person that gets this album, we've achieved it. Because it was everything that we set out to do and more, it was like that thing, going back to that Beatles thing of Sgt. Pepper's pushing the envelope. Being a rock band, a hard rock band, we felt we'd done that with this album and it just felt really good. So all the other stuff was gravy, especially when it come number one a year later or whatever it was. That was all gravy. But the real achievement was actually finishing it off and it sounding like it did."

Frontman Joe Elliott shared, "It's hard to think it's 35 years ago, because it's just a constant in your life like shaving or having a shower. It's just a constant. Which I know a lot of artists struggle with that. They go, I just don't want to talk about that. We are extremely grateful for the opportunity and the lifestyle that album has afforded us and the fact that it's gone into folklore, it's one of the big albums... And this is difficult for me to say, because it's really something that other people should say. But, it's up there with all the albums that we used to buy as kids. And so we're extremely grateful for what it's given us. We put a lot of work into that record. So from that point of view, the perspiration that went into it and the inspiration that went into it, that reward is the fact that it's being celebrated. It's lasted this long, it's going to last a bit longer as well I think."

Collen also reflect on the album initially tanking and getting a second life with the breakout success of "Pour Some Sugar On Me". he said, "Well, it tanked at first it. Hysteria come out, we'd spent so much time and money on it. It came out and was like, disappointed.

"In England, it was great because it went top 10. Went number ...And so we're like, "Yeah, this is cool." And in America was really slow and it didn't happen. Second single, didn't happen. It was like different running orders, like Women, Animal, Hysteria. Sugar, so our albums hasn't made its money back, were in debt, and these girls in these strip clubs in Florida keep requesting this song on the local radio because they're dancing to it, because it's got this sexy groove and it's got all the things we were talking about. It's got this rock thing, it's got this rap thing, it's got these heavy drums and you can apparently dance to it in a good seductive way.

"Anyway, they're requesting it like crazy. It starts catching on fire. So it's on all the stations down in Florida, it starts going to number one on the stations. It gets picked up, goes to other places...so anyway, that's how it kicked off. And it started a snowball effect. It fired up and then all of a sudden everyone's going, 'Oh my God, this is the best album you guys have ever done. This is so amazing'... and the album goes to number one, twice, album ends up selling 12 or 13 million in America, and you go, 'Wow.'

"But we were well aware of how it stung when we put it out... We were pleased because we felt we'd done this music that was the best thing we'd ever accomplished. So we were really happy with that. We was just a little disappointed there wasn't a reaction until that song came out, and then there was a massive reaction. Just night and day." Check out the episode here.