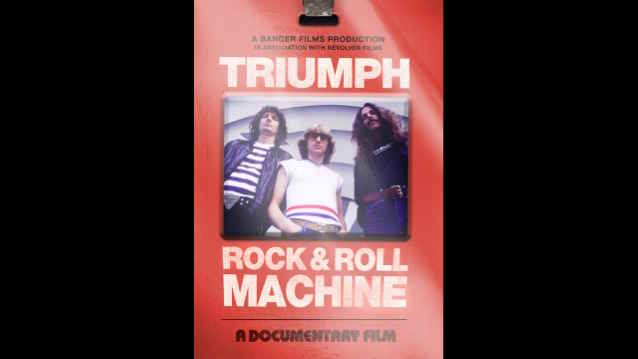 AXS TV have announced the broadcast premiere of the rock doc Triumph: Rock & Roll Machine will be happening on Wednesday, January 25 at 9 p.m. ET/6 p.m. PT and the have shared a preview trailer.

The network sent us the following details: The film tells the true heavy metal underdog story of Canadian outfit Triumph, whose signature sound and revolutionary stage show rocked fans around the world and skyrocketed the band to superstardom on the strength of chart-topping guitar anthems such as "Fight The Good Fight," "Hold On," "Magic Power," and "Lay It On The Line." Rock & Roll Machine shines a deserving light on band members Rik Emmett, Mike Levine, and Gil Moore, exploring the impact and influence they had on the hard rock scene throughout the '70s and '80s, and capturing their long-awaited reunion.

Triumph: Rock & Roll Machine was produced by Banger Films (Alice Cooper, Iron Maiden, Rush and ZZ Top) and directed by Sam Dunn and Marc Ricciardelli. The documentary was funded in part by Round Hill Music, Triumph's global record label. Watch the trailer below: