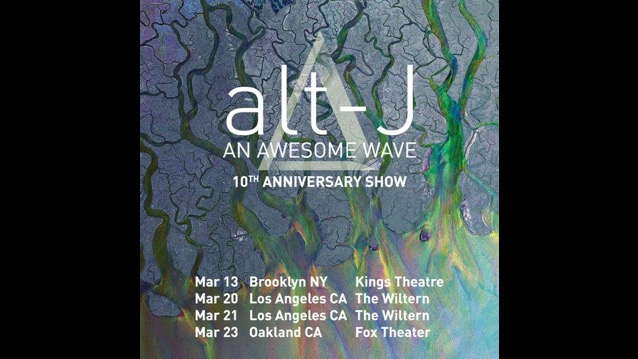 alt-J have announced that they will be launching a short U.S. tour next spring to celebrate the 10th anniversary of their Mercury Prize-winning debut album, "An Awesome Wave".

These new dates will mark the first time that the band will perform the album in full for U.S. audiences, following their worldwide digital concert event and exclusive new podcast series earlier this year.

The band has announced four dated beginning on March 13th at the Kings Theatre in Brooklyn, followed by two nights at The Wiltern in Los Angeles on March 20th and 21st, and wrapping up on March 23rd in Oakland at the Fox Theater.

They had this to say, "It's been such a great year promoting both The Dream and An Awesome Wave's 10th anniversary that we have decided to extend the party into 2023.

"We are delighted to announce a run of AAW anniversary shows in the US in March where we will play the album in full for the first time in America. We hope you can join us."